“From a new normal of smoky summers and dangerous heat in Seattle, I have never seen the impacts of climate change that we are now facing,” said Mayor Jenny Durkan. “We’ve invested billions to support green transportation, efficient buildings, and other policies to mitigate climate change, but we know we need to do more to reach net zero. Cities are leading the way to take real action – our work in the last four years is making a commitment to reduce our building emissions by nearly 50% and lead the nation on climate justice and equity.”

Buildings account for more than one third of Seattle’s climate pollution and are one of the fastest growing sources of emissions. Mayor Durkan’s Climate Action Executive Order will:

“Seattle needs to take serious and significant action to reduce greenhouse gas emissions from buildings. A carbon-focused building performance standard is a cornerstone to that effort and will build on the success and work at the state and city level to reduce energy use,” said Amy Wheeless, Senior Policy Associate at the NW Energy Coalition. “This bold action must also come with supportive policies that ensure the benefits of this transition are equitable and support affordable energy services.”

Key provisions in the Executive Order include:

“Expanding ease of access to public transit is a key element of creating a climate resilient and socially equitable city,” said Alex Hudson, Executive Director of Transportation Choices Coalition. “This transit expansion project will help get more young Seattleites where they need to go safely and reliably, while also lowering transportation costs for families and empowering a new generation of transit riders.”

In addition to policies that reduce emissions in the buildings and transportation sectors, the City is working to advance a more diverse clean energy workforce to ensure a just transition off of fossil fuels. Key provisions of the Executive Order include:

“Seattle has been a trailblazer in energy efficiency, mode shift to transit, electrification, smart growth near transit, eliminating fossil fuels from homes and commercial buildings, and climate justice, but we need to do more,” said Michelle Caulfield, Interim Director of the Office of Sustainability & Environment. “I’m proud to see Seattle’s leadership on display at COP26 and the Mayor standing with leaders from across the globe to confront the climate emergency head-on.”

Mayor Jenny Durkan announced the executive order from Glasgow, Scotland, where she is representing the City of Seattle at the COP26 Climate Summit which brings Cities and nations together to accelerate action towards the goals of the Paris Agreement and the UN Framework Convention on Climate Change.

“Cities have proven time and again their ability to push the envelope on climate action and consistently raise ambition – the Building Performance Standard (BPS) announced today by Mayor Durkan is a great example,” said Kelly Shultz who leads the sustainable cities program at Bloomberg Philanthropies. “Policies to lower building emissions are critical to ensuring a sustainable, more inclusive future. We celebrate this announcement and look forward to continuing our collaboration with cities leading the fight against climate change like Seattle.”

“It’s exciting to see these next steps from a city that already has ambitious climate policies on the books,” said Elizabeth Stampe, a city strategist at NRDC with the Bloomberg Philanthropies American Cities Climate Challenge. “Policies like free transit for kids and cleaner energy in large buildings do more than reduce greenhouse gas emissions: they make Seattle a better place for all people to live and breathe. A zero-emission pedestrian zone is an especially important way to reduce pollution and make way for safer walking in Seattle. As the City makes good on these commitments in the coming year, we expect to see equity front and center alongside decisive climate action.”

The City of Seattle has already led bold action to advance energy efficiency and decarbonization in buildings, including a new commercial energy code that is among the strongest on climate in the nation, an Oil Heat Conversion Tax to fund low-income household conversions from oil heat to electric heat pumps, a ban on fossil fuels in new municipal buildings, accelerated transportation electrification including expanding bus-only lanes and transit capital investment, 52 miles of new bike facilities in the last five years, EV Readiness Ordinance requiring EV-ready electrical service in new off-street parking stalls, environmental and racial justice policies, and more.

The International Facility Management Association (IFMA) is pleased to announce the launch of its expanded Facility Management Training and Development Framework (FM Framework). IFMA has created a single source for interdisciplinary knowledge- and skill-building by partnering with 8 of the most well-respected and influential organizations in the built environment industry.

The FM Framework provides industry-leading training from IFMA’s partner organizations that is relevant to all built environment practices.  FMs now have direct access to top training solutions in disciplines that fall under the umbrella of FM responsibility, including cleaning operations, HVAC, electrical, plumbing, security, building repairs, IT and more.

In conjunction with IFMA’s ANSI-accredited credential programs and professional development courses, the framework provides a unified training program that covers the entire life cycle of the built environment.  The brainchild of 2018-19 IFMA Board Chair Graham Tier, CFM, FMP, MRICS, the 2019 FM Framework provided guidance on specialized skillsets. It classified specific roles, mapped the skills needed in facility management and recommended professional development options from a network of associations.

“IFMA has been building bridges across disciplines for years, partnering with associations that have training for FMs and cross-promoting our educational resources,” said IFMA President and CEO Don Gilpin. “The updated FM Framework goes a step further, directing professionals to a specific course or program offered by the industry’s recognized authority in a desired specialty area. Whether you need to dive into a skillset, oversee a specific function within the facility portfolio or meet a particular organizational goal, the framework takes the onus of finding the training off the FM.”

IFMA is relaunching the FM Framework with the following partners:

“FMs have to ensure their team can perform all of the necessary roles and collaborate effectively with other departments. That takes an understanding of diverse job functions that goes beyond rudimentary knowledge,” added Gilpin. “Upskilling in a range of specialty areas will help FMs adapt to a new work environment, bringing a higher level of excellence to their organizations and themselves.”

LIGHTFAIR® International is the industry event where everyone–from huge conglomerates to small tech-firm startups–come to display innovative new ideas that are changing how we illuminate and connect to the world around us.

Following LIGHTFAIR® 2021, the Lighting Design Lab and Smart Buildings Center are partnering to bring you post-conference analysis and information exchange! Bring us your questions and be ready to share your own experiences. Favorite new products? Most exciting trends? Let’s “nerd out”!

The Lab’s focus at LIGHTFAIR® includes networked and luminaire level lighting controls, non-energy benefits, integration to other building systems, or systems that connect utilities and their customers; and other hot topics like lighting and health and identifying market barriers/education needs. If any major lighting industry news is revealed, we’ll also look to cover it. 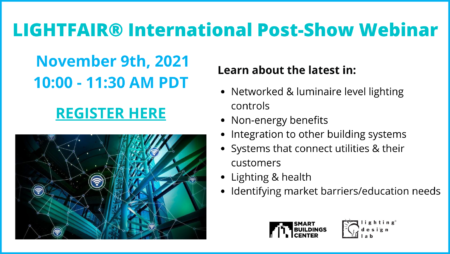 PSE and Resource Innovations look forward to working with you and your customers in these exciting commissioning programs.

Strategic Energy Management in Higher Education Facilities: COVID and Beyond